Design a site like this with WordPress.com
Get started
Skip to content
romanianrevolutionofdecember1989 Uncategorized January 18, 2020January 18, 2020 4 Minutes 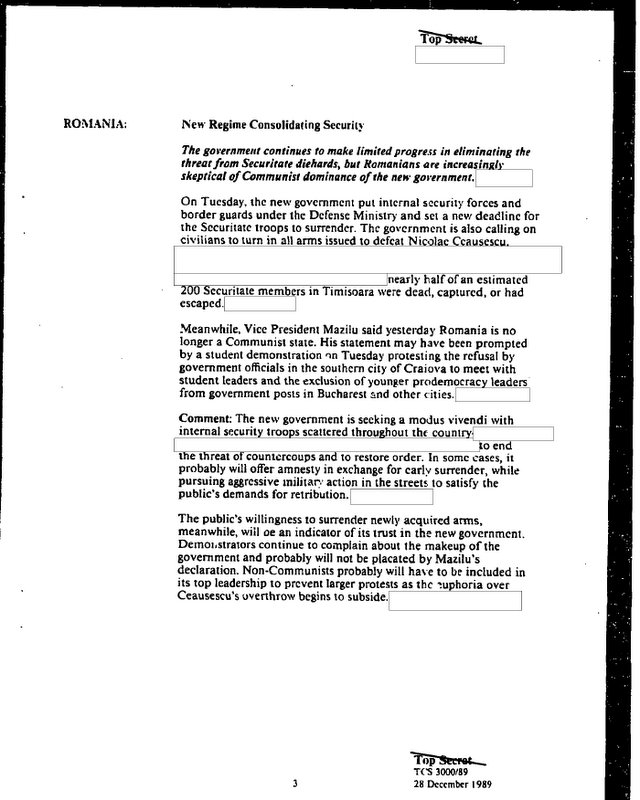 The government continues to make limited progress in eliminating the threat from Securitate diehards, but Romanians are increasingly skeptical of Communist dominance of the new government.

What can we learn from this?  For one thing, there is nothing here, absolutely nothing, to substantiate the claims of the military prosecutors in the Indictment of April 2019 in the so-called Dosarul Revolutiei, according to which Ion Iliescu, Gelu Voican Voiculescu, Iosif Rus, Nicolae Militaru and other military commanders are accused of having “invented” a terrorist diversion with non-existent terrorists in order to seize and legitimate their power, especially by intentionally disseminating disinformation through television.  Nor is there anything here about Generals Stanculescu, Guse, and others with blood on their hands for their role in repressing demonstrators in Timisoara giving contradictory orders and “inventing” terrorists in order to create a heroic image for the military and buy themselves immunity for their actions in Timisoara.  Nor is there anything here about everything just being about confusion, and suspicion, and mass psychosis, and accidental “friendly fire” being the dominant condition.  Nor is there anything here about the Army’s DIA (Buzau 404) or “Soviet tourists” (KGB, GRU, Spetnaz), etc. or others as being the actual terrorists engaged in a false flag operation to incriminate the Securitate.  Nor as a journalist in Romania suggested was the use of the term “Securitate diehards” inspired by the 1988 Bruce Willis film “Diehard” or was CIA “prisoners of information supplied by the [National Salvation] Front https://evenimentulistoric.ro/cia-prizonierii-informatiilor-venite-de-la-fsn-documente-inedite.html …that is why two lines are excised in the section above, precisely because of the highly sensitive level of how the information was acquired.  Finally, it should be clear, especially if one reads the entire document, that the analyst[s] who wrote this crisis piece, had no illusions about Iliescu and the Front (they saw that they were high level former communists who were already being decried by people in the streets) or that ‘free flowing arms’–arms distributed or seized by the population during the events–were a fact.  But these were facts, alongside the fact that there were Securitate terrorists fighting on behalf of Ceausescu, something which they knew from sources other than just international media or “The Front.”

Significantly, the CIA NID from 28 December 1989 is consistent with what National Security Council (NSC) Director for European Affairs Robert Hutchings maintained in 1997: “It was an argument that had a few adherents at staff level during those chaotic days, during which a successful counterrevolution by Ceausescu loyalists seemed a real danger…110. …With Moscow as with others [“Bonn, London, Paris, and other capitals”], there was a broadly shared desire to see Ceausescu loyalists defeated, the bloodshed ended, and the democratic ‘spirit of Timisoara’ vindicated.” https://romanianrevolutionofdecember1989.com/robert-hutchings-nsc-director-for-europe-89-92-on-romania-december-1989/

The second and third documents here are courtesy of the efforts of the Canadian journalist, Stanley Tromp (the US documents referred to are from the Department of State):

Records on the Romanian Revolution of 1989

Obtained by journalist Stanley Tromp, through the

The below is from File 5 of Records from British Foreign Office – 109 pages, page 27, from pages 26-28, a cable from Bucharest on the chronology of the Revolution, date 2 January 1990. 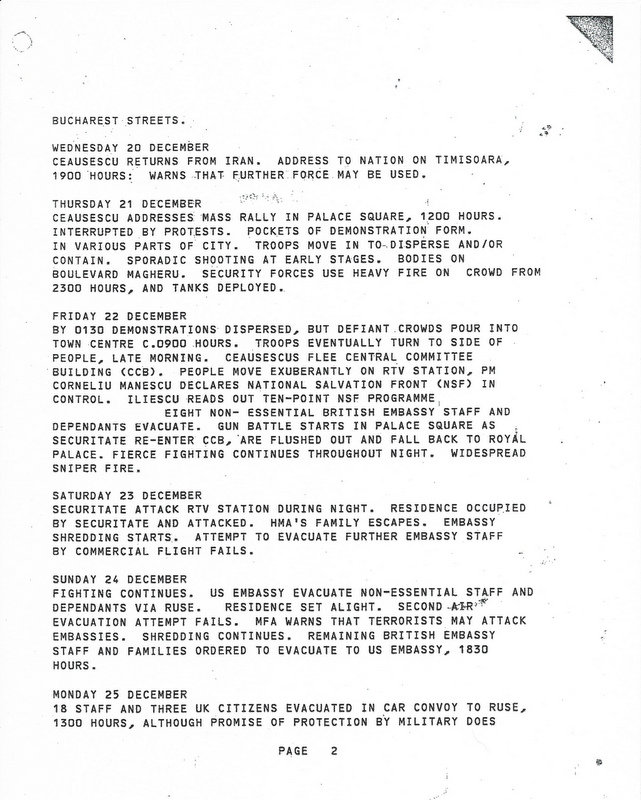 Significantly, in File 6 from Canada’s External Affairs Department, on p. 88, from 24 December 1989, the Canadian Embassy in Bucharest also alludes to the “terrorist” attack on the British Residence.)

4. FIGHTING TODAY WAS FIERCE NOISE, SPORADIC AND WIDESPREAD, REFLECTING TRUE NATURE, TRNG AND COMPETENCE OF ARMED FORCE COMPONENT OF SECURITATE. WHETHER AND TO WHAT EXTENT NON ROMS [non-Romanians] WERE USED BY OR FORM PART OF SECURITATE THEIR BRUTALITY SINCE TIMISOARA WILL LEAVE ITS MARK OVER AND ABOVE EARLIER REPUTATION. TACTICS AND DETAILS OF THESE TERRORISTS AND THEIR OPS ARE NOW WELL BROADCAST AND PHONE CALLERS SUBSTANTIATE THE WORST.

2….OUR CDNS [CANADIANS] LEFT CHANCERY IN SEMI-DARKNESS WITH LOUD ACCOMPANIAMENT [sic.] OF AUTOMATIC AND SMALL ARMS FIRE NEARBY.  THEY SHOULD BE IN PLENTY [of] TIME TO ATTEND MIDNIGHT SERVICE AT NEVSKY CATHEDRAL IN SOFIA AND LUCKIER THAN SAY BRIT CONTINGENT WHO WERE RETICENCT TO MOVE UNTIL RESULT OF AMER [AMERICAN] EFFORT.  THEIR CONCERN BASED PROBABLY ON MORE EXPOSED POSN [POSITION] AND BLOW OF HAVING AMBS [AMBASSADOR’S] RESIDENCE BURNED TO GROUND BY TERRORISTS.

If one puts these cables side by side with what has appeared in media and on the Internet in the past several decades, there is little doubt that there is no confusion here…British Embassy Staff did not mistake soldiers, or Interior Ministry personnel fighting on the side of the Revolution, or panicked, untrained armed civilians, for those who seized the ambassador’s residence.  It was clear, they were Securitate terrorists.

See, for example, such details here:

Also, related to confirmation of information about December 1989, from December 2019:

View all posts by romanianrevolutionofdecember1989

One thought on “Declassified U.S., British, and Canadian Documents on the Romanian Revolution of December 1989”